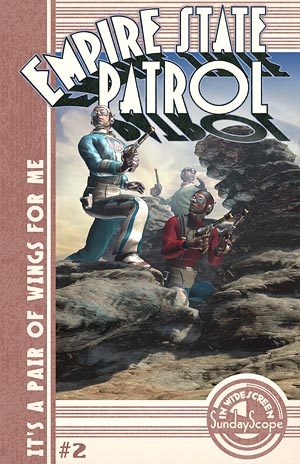 This is a concept piece for my huge, looming, and intimidating comics project, “Empire State Patrol”. Which I think will take about as long to finish as the cathedral at Chartres. Go on, look it up. I’ll still be here.

There’ll be a common layout for all ten covers, which I think will be pretty much what we see here, and I’ve added an illustration for a scene in the second chapter. Since this is the cover for issue #2. I’m probably not really done with it, but finishing things like this makes me feel like I might be getting something done. Silly, silly me.

That’s Jake Rothman up on the rock, Marco Lippi down below, and Clay Hooper out back. They used to be construction workers. Now they’re rocket pilots. Life’s just crazy that way.

This entry was posted on Wednesday, April 9th, 2008
and was filed under Computer Graphics, Works in Progress
There have been 5 Responses »

I first discovered your work on an ad on my own website and was completely blown away. I have admit a bit of amusement that a guy named ‘Schenk’ is designing Celtic designs like an ‘O’Malley’, but no bother! You work is amazing, and I’m looking forward to following your site!

That must be the Xylia web comic, right? Which all right-thinking people should visit.

And about my name, you’re ignoring my grandmothers :). That was actually the best approach to one of them, but they were both Irish-American.

“And about my name, you’re ignoring my grandmothers :)” Of course! I wondered if that was not the case!

I wondered- do you have any tutorials where you explain your work techniques? You are amazingly prolific, and your images are so dazzlingly detailed in a gorgeousy retro way. I wondered if perhaps you had a cyborg arm that allowed you to work uber fast and while you sleep. ^_^

All of my fave illustrators are from the Golden Age like Leyendecker, Wyeth, and Parrish and your images seem to harken back to them!

Oh, and thank you for putting your ad up on my site- it is so beautiful!

I haven’t really done a lot of tutorials, not really in-depth stuff. A little bit about using surface displacement for terrain. There are so many 3D artists who are really smarter than I am on most topics.

Glad you’re happy to see the ad on xyliatales.com – it’ll probably be popping in and out. I’m still experimenting with them. It’s hard to predict what ad, and which of my sites, will work really well with a given audience. Full of surprises!

Oh, heck. How could I have failed to mention how rare it is to see a door-smashing berserker Corgi in ANY webcomic?