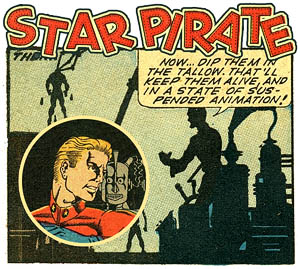 Hot off the web pages of Golden Age Comic Book Stories is this eight page story by Murphy Anderson, from Planet Comics in 1945.

I have to admit I’m not sure why our hero’s actually named Star Pirate, why he hangs out with an obese space pirate named Blackbeard, or whether he actually is a pirate. He seems like a pretty straight arrow to me.

But none of that’s very important when you discover that you’re in a world where towering robots buy all the slaves at a slave auction and almost no one is curious about why they want them; or when you find that there’s a mad scientist at work, which of course is reassuring – but most importantly, we learn here that dipping people in tallow will preserve them in a state of suspended animation. Hot? Yes. Disgusting? You bet. But oh, so useful.

The story spans two posts on this page.

This entry was posted on Wednesday, February 27th, 2008
and was filed under Found on the Web
There have been no responses »