Continuing Progress on my Retro-Future Cityscape 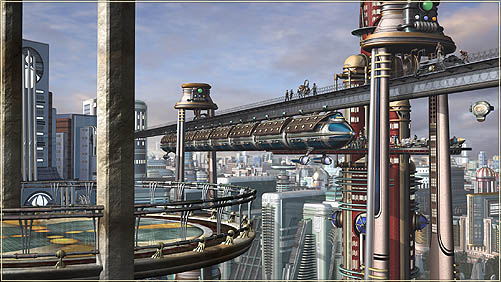 All may seem quiet around here, but in fact I’ve been working steadily on this image (which I posted about earlier, here and here). Although I’ve thought about posting some more updates, I haven’t. All of this new work has been on distant elements, and then the monorail terminal and the sixteen characters who are getting off (or on) the monorail, or working up on its track (see the inset at right). Because of the relative size of all those things they’re scarcely visible when the whole picture is scaled down from over 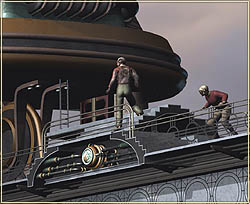 7000 pixels wide to this size, 501 pixels wide. So it’d have been almost pointless to try to keep you up to date. There’d have been very little obvious change.

As of this afternoon, though, I’ve got the far and middle distance more or less set; I’ve done the final (or semifinal) renderings of the three scenes that so far are composited together here, and I’ve added a sort of poor man’s depth of field effect on the distant cityscape.

Although there will be quite a bit of retouching to do in Photoshop, everything you see behind the foreground balcony is in a semifinal state. So I thought I ought to post an update now, before I start working on the foreground.

I had some difficulties with the way 3DS Max does its render effects and rendering passes. The first problem was that I was getting unpredictable results from the Z Depth pass. That’s an additional rendering that uses greyscale to show how far from the camera everything in the picture is – it can be very useful for creating masked effects, like depth of field, in post.

So to get around that, I’ve created a Z Depth pass in a sort of handmade way, using the free Bytegeist “ZTint” plugin for Max. I rendered out a Z Depth version of each scene and combined them together in Photoshop (see below). By using the exact same settings in each rendered layer I’ve built up my own Z Depth version of the background. It makes a geat mask for adding efects to the entire scene in Photoshop, based on their distance from my camera.

In order to get what you see below I applied a white, self-illuminated material to every visible object. The ZTint render effect added black to the object color depending on its distance. 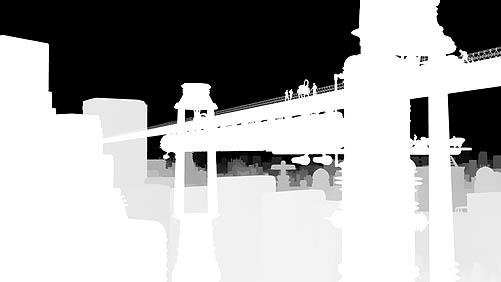 It turns out that it was a good idea to avoid Max’s render elements, because another problem I ran into was that when network rendering the scene in strips – which conserved memory while these very large images were rendering – the additional rendering passes were not rendered correctly.

The main image rendered out in ten strips which were then stitched together at the end. But additional render passes like Z Depth or a specularity pass were never completed in the same way: each strip just overwrote the previous one and they were never assembled together, since only one tenth of them existed at the end anyhow. Annoying.

I’m still using Max 8, so I don’t know if that bug’s been fixed in the more recent versions.

Anyway, it’s now time to turn my attention to all the work I have yet to do on that balcony in the foreground and the characters there. I don’t have any real idea of how long those bits – and the final compositing and post work – will take, but I figure it’ll easily be another couple of weeks before this is done. Luckily for me, I’m not working to a deadline!

This entry was posted on Thursday, February 21st, 2008
and was filed under Computer Graphics, Works in Progress
There has been 1 Response »

One response to “Continuing Progress on my Retro-Future Cityscape”
Will Hughes says:

Wow, great work! We’re doing an Indie Retro Sci-Fi film… any chance this can move and you’d be interested in having it in our film? We’d let you do all our shirt business and we’d advertise you heavily!