Now if we were to quibble, we might call this a Laser Lyre rather than a Laser Harp: it’s got a limited range, and the arrangement of the “strings” is more lyre-like than harp-like. But we don’t get to quibble because we aren’t clever enough to build one ourselves, are we? 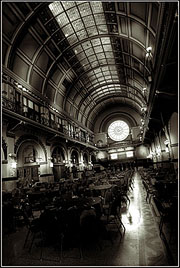 This is the brainchild of Stephen Hobley, a photographer from Indianapolis. The “Laser Harp” is one of his side projects – another was the conversion of a player piano into a computer case.

Hobley has posted a brief tour of the Laser Harp’s workings here, with more information at his blog. And while you’re there, don’t miss his photographs of Indianapolis’ decaying Union Station – really nice stuff there!

This entry was posted on Friday, February 15th, 2008
and was filed under Found on the Web
There have been no responses »