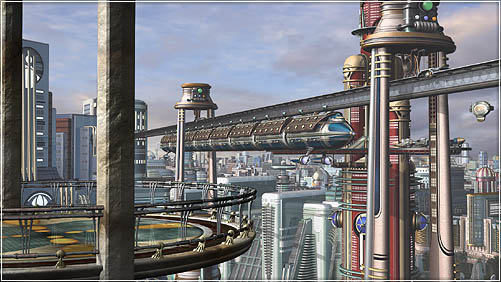 This is the first practical use I’ve made of the city model I started ages ago and worked on again during the fall. It’s interesting to see how I’ve come to use it. Because the city itself is built out of large, complex sections, it was simple enough to drop a complete copy into my

background here. The surprising things happened when I tried to make a picture out of it; like Raymond Loewy’s revision of the Lucky Strike cigarette pack, the real trick was in figuring out what to throw away. So while I did plenty of moving, scaling, and rotating of individual buildings, more than anything else I had to decide which ones to delete completely in order to open up the vista in a way that served the picture.

I added a lot of detail to the monorail pylons and created catwalks that run their length. There’ll be a few workers up there soon. But today I’m positioning some shadow-casting silhouettes that create the illusion that more buildings, out of the frame, are casting shadows across the ones we see close up. There’s a lot of trial and error involved in that. Like there is, um, in everything else.

I’m still handling the scene in three separate layers. Once I combined the far and middle distance into a single scene the rendering times increased pretty dramatically – and having them all together didn’t actually solve any problem I needed to solve – so I split them apart again. Go figure.

One little tool that was all sorts of help here is Martin Breidt’s Image Overlay script for 3DS Max. It’s really meant to superimpose frame numbers and other data on renderings, but it’ll also do a quick image overlay. I’m using it to drop in whole layers (like a Targa image of the foreground balcony) so that I can see how the layers stack up, while I’m just working on one. A back layer’s easy – it’s just an environment map –  but it’s been really helpful to composite that foreground in as I go, too.

This entry was posted on Monday, February 11th, 2008
and was filed under Computer Graphics, Works in Progress
There have been no responses »