The City Beneath Us – Building the New York Subways

Vivian Heller’s The City Beneath Us

is a wonderful book from the New York Transit Museum, full of period photographs and information about the construction of the three lines that eventually merged to become the single New York subway system. 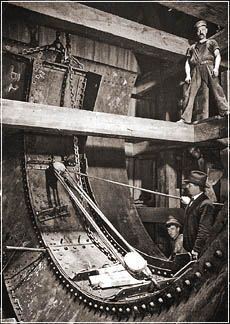 I’m especially interested in the appearance of the tunnels during the 20’s and 30’s, as part of the research for a gigantic personal project of mine. Heller’s book doesn’t disappoint there, but I found that I was captivated by the wealth of historic detail about the struggles to create and maintain the system – first opposed by those who thought it was impossible or ill-advised, and later plagued by the political impossibility of raising the nickel fare – which lasted for nearly 45 years – so that the system could be properly maintained and expanded.

I was amazed to learn that the short test run of a pneumatic subway was constructed secretly (and illegally!) before 1870. That’s how desperate the city was to give its immigrant population some means of getting out of the overcrowded tenements of lower Manhattan – one of the prime motivations behind a public transportation system.

The three lines were built using several different techniques, depending on the composition of the land they were cutting through. While tunnels were driven through rocky sections, a “cut and cover” technique was used wherever possible. Utility lines (already a labyrinth beneath the city) had to be rerouted so that trenches could be cut below the streets and then covered over, the streets being restored above the heads of the workers who then completed the work. Where stone was removed from the tunnels it was moved, with carts, cars, and mules, and crushed so that it could become part of the concrete that formed so much of the tunnel lining. This work was largely done at the turn of the twentieth century and the engineers worked brilliantly within the limits of their technology.

The design itself was so good that even after the collapse of the Twin Towers on 9/11 there was little damage to the tunnels except where they passed closest to the World Trade Center. When those tunnels were rebuilt, the modern engineers made only minor modifications to the hundred year old bracing design that had worked so well.

Likewise the construction of the subway lines that passed underwater used techniques that are very similar to those used in the trans-Bosporus tunnel now being built in Istanbul. Whatever else you can say about the turn of the 20th century, those were days in which builders rightly believed that they could accomplish just about anything. 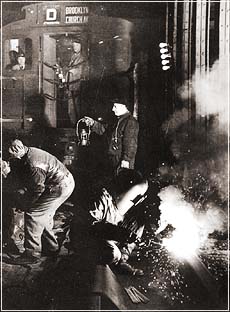 Like any public transit system the New York subway has had its rough times, its encounters with bankruptcy, its intrigues, and its rebirths. It’s where Heller’s book deals with Robert Moses that I just had to smile. Moses is a polarizing figure in New York history and he was no friend to public transportation. When I’ve read about Moses’ role in the creation of the 1939 New York Worlds’ Fair, he’s described as a visionary – but because so much of that vision was based on the automobile and its highways he’s very nearly demonized here. He is always a figure who seems larger than life, either way – though from this 21st century vantage I have to lean toward the Transit Museum’s view of him. New York would have been far better served through the improvement and expansion of its public transit.

The text runs for just 81 of the book’s 245 pages – the rest is given over completely to the vintage photographs that introduce us to the workmen and sites that, street by street and borough by borough, gradually knit themselves together into a functioning network that now carries people rapidly and reliably through all of Manhattan and its outlying areas. And while that complete process took decades it’s still true that its original framework – the IRT line – came together in just the first four years of the 20th century, at a time when the city was growing and changing at an unprecedented rate. Mounting and completing such a major project in the middle of that growth and change was – and remains – a staggering achievement.

The City Beneath Us – Building the New York Subways

This entry was posted on Thursday, February 7th, 2008
and was filed under Reading / Watching / Consuming
There have been no responses »