I’ve never liked showing work in progress*, and I can prove it.

Though I don’t remember this myself I have it on the best authority that as an infant, I just wouldn’t talk. Just wouldn’t. They were actually getting sort of worried about me, till one day I fell down and hurt my head badly enough that blood poured all over my face, and before I could stop myself, I yelled “Get this stuff offa me!”

The first thing I ever said was a complete sentence. The way I figure it, I wasn’t going to say a word to anyone until I’d conjugated everything that could be conjugated in my head so that no one could hear me make a mistake. True story. 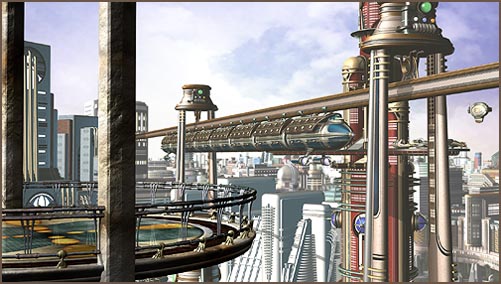 So obviously that means I’d rather not let you see things that aren’t finished, except that’s stupid, so here’s one that’s a long ways from being finished yet. It’s so unfinished that it doesn’t have a name. I usually name these after the titles of, or lines from, popular songs of the 20s and 30s, and though I have a few ideas I’m not sure yet what it’ll be called.

I’m combining a lot of elements here that I’ve built during the past eight years (which means some of them need some retooling; I spent some time reworking the monorail pylons, for example, which are just so dang big in this picture) along with some new stuff. The new bits are/will be mainly in the near foreground, where some of my newest Retropolitan characters will appear in their glorious high res-ness.

And though at the moment it’s arranged as three separate scenes – eventually, it’ll probably be two – I’m having a wonderful and a very relieved time spreading out into the new memory space that’s available to me now that I’ve finally gone over to a 64 bit OS. There are frequent sighs of relief here in the Secret Laboratory.

I’ve got tons to do on… well, practically everything… but the highlights will be the people on the balcony and what they’re up to, some folks debarking from the monorail, and more, some of which will come as a surprise to me.

The distant buildings are part of my ongoing city model, a necessary and huge asset for my “Empire State Patrol” project. Miles to go before I sleep, and all that.

This entry was posted on Saturday, February 2nd, 2008
and was filed under Computer Graphics, Works in Progress
There have been no responses »