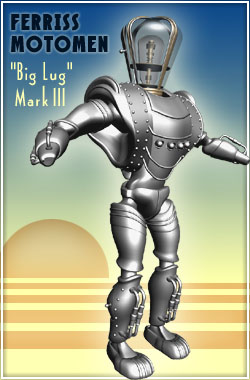 I don’t have a rational reason for modelling a new robot, but I’m doing it anyway. So sue me.

I guess I do have a sort of an excuse, since I want to do some work on the new computer even though I’m not highly motivated to do any of the things I really ought to be working on. So that leaves me with my new Ferriss Motomen “Big Lug” Mark III.

I was having some fun with him until I dropped that head on him, at which point I really started having some fun. Hands, head gizmos and textures to follow.

I think it took me longer to put together this computer than it ever has before: a few case fit-up issues, unfamiliar connectors, and problems with installing some software and devices in a 64 bit OS. Or maybe I’m just getting old and slow. Anyway I’m awfully happy that I can now feed twice the amount of RAM even to 32 bit applications – the first bit of anything worklike I did was to successfully render the preview of a scene I’d been working on, which had bombed out due to insufficient memory before. The memory was there, but no one program could use it all in a 32 bit OS.

And I’m still thinking about that new desk. It could happen.

This entry was posted on Monday, January 14th, 2008
and was filed under Works in Progress
There have been no responses »