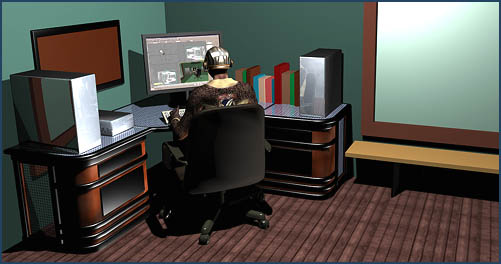 Okay, I pretty much never make anything for myself. But I’m about to build a new computer, and that’s got me thinking about the new desk I still haven’t made even though I’ve been in this house for two and a half years.

The workspace I’ve got is pretty functional but doesn’t fit well in its room. So while I wait for my new components to arrive I’m tinkering with a layout for the room and its potential desk – complete with a retro-futuristic self, since I don’t have a character model that looks any more like me – and, who knows? I might even build it. I’ve optimistically thrown in next year’s new monitor, but I’ve also used a scale model of my current 24″ CRT to make sure that everything fits.

I’ve placed speaker covers on the sides, which use the same perforated sheet steel I’ve used for the desktop (though under glass, there) and I think I’ve more or less puzzled out how I’d handle the pedestals with their veneer. At the rate I’m going I ought to be sitting at this desk within a decade or so. Though probably not in that outfit.

This entry was posted on Wednesday, January 2nd, 2008
and was filed under Works in Progress
There have been no responses »