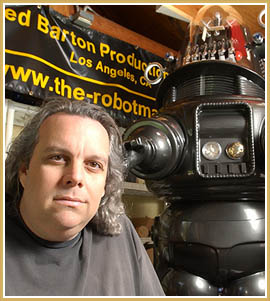 In their day, they changed the world. Their goal might have been to rouse the proletariat to an ill-advised revolution, or to bring a message of peace to a world full of frightened and trigger-happy Earthmen; theirs might have been a simpler duty, like protecting Anne Francis or Will Robinson (“Danger!”), or taking care of the very last plants from planet Earth. But whatever role they once played in the unfolding might-have-beens of our favorite movies, the question these days is Where are they now?

Fred Barton knows. They’re over at his place.

Since 1996 Barton has devoted himself to fulfilling his own robotic fantasies. He’s made a name for himself in film prop restoration, specializing in the (mainly robotic) science fiction classics. His workshop has played host to the original Robbie the Robot from Forbidden Planet, the B9 robot from Lost in Space, and many of the other mechanical creatures that you’ll see on his web site. They’re now available as high quality reproductions that in many cases are better than the original props and costumes were. 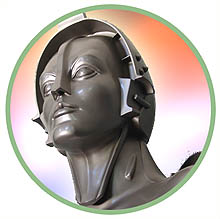 And even if he didn’t restore their originals, he was likely off site to do his research and take measurements and casts – as in the case of his reproduction R2D2 and C3PO. Those guys don’t get off the ranch these days.

The centerpiece of this collection just has to be the animated, talking Robbie. He incorporates an iPod to deliver his audio and his various control panels and scanners light up and accompany his actions just as they did in Forbidden Planet. He’s just plain amazing – though I guess for myself I might rather have the “Evil Maria” fembot from Metropolis. She’s…well, more my type, at the risk of being misunderstood.

Barton’s bots cover a lot of animatronic ground from “none”, in the case of Maria, to “gee whillikers!” at the Robbie end of the scale. And they’re not what most of us would call affordable – I mean, Barton’s clients include Paul Allen. But you can take heart in the knowledge that this would be way cooler than a compact car, at about the same price, and you can even lease Robbie for trade shows.

Thanks go to Daniel Mowry for the link.

This entry was posted on Thursday, December 20th, 2007
and was filed under Found on the Web
There have been no responses »