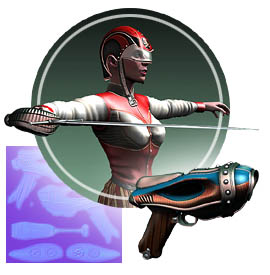 It’s been quiet in here lately, but for good reason; I’m working on a set of characters for a project, and character work always takes a lot out of me – although this part’s fun. Just don’t ask me about rigging and skinning them. I get nightmares.

This is a space pirate and I have indeed been having a great time working on her. She just needs hair and that rigging-and-skinning process that I mentioned I have issues with.

While I was working on her ray gun I experimented with the beta version of Crazy Bump, an excellent normal map generator. Back in my game days we always used the Nvidia normal map plugin for Photoshop (there wasn’t much else to use) and I wasn’t ever exactly thrilled with what we were able to get out of it.

Crazy Bump, on the other hand, has several tools for analzying your texture maps. It can look for large 3D shapes in the image, and it can find large, medium, or fine levels of detail in it. Once it’s discovered all of those things you’re able to mix their levels together, as well as the overall strength of the normal map, to get just the shapes you’re after. You can blend images together, and you can edit existing normal maps, too. Very nice!

It’s free standing (so it works for any 3D app) and during the beta, it’s free.

This entry was posted on Friday, October 5th, 2007
and was filed under Computer Graphics, Works in Progress
There have been no responses »