“If I Only Had Wings, I’d Fly” – a new Retropolis Poster 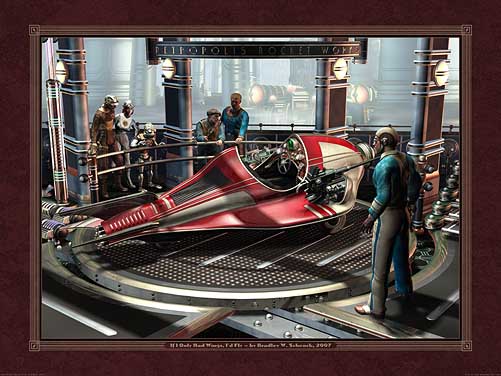 This scene – a sort of car show of the Future That Never Was – showcases one of the rockets I modeled for my Empire State Patrol project. Here I changed its color and dropped it into a variation on the scene I built for my “Skin A Scion” contest entry at Deviant Art.

The poster (18 by 24 inches at 300 DPI) mixes some older and newer characters together, and its title – “If I Only Had Wings, I’d Fly” – marks the second time I’ve named a picture with a quote from Nat Gonella’s “It’s a Pair of Wings for Me”, which still swings after about 66 years. Love that song – and in fact, though I’ve never known how many people noticed, almost all my Retropolis pictures use titles or quotes from popular music of the twenties through the forties. If you figure out why, you can explain that to me.

The poster is available now. An archival print should be available in a few days.

This entry was posted on Friday, August 17th, 2007
and was filed under Computer Graphics, Works in Progress
There have been no responses »