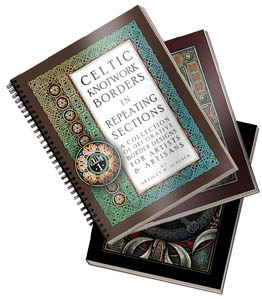 I’ve always loved books, and I do mean always; I learned to read at such an early age that I can’t remember doing it, or a time when I couldn’t read. That’s very different from the way I learned to talk, but trust me – that’s another story.

In fact when I was young I always believed that I was going to be a writer. It just didn’t work out that way.

I started using traditional Celtic knotwork designs in my drawings and paintings back in 1980. During the 80s I continued that and eventually began to invent new patterns of my own. Then at some point in the early 90’s, I stopped. I think it was because I was getting so typecast as “the Celtic Art Guy” that it was annoying, and I figured I ought to show my chops in some other kind of art. But also, I probably wanted to explore something a bit different just to suit myself. But by the end of the 90’s, or so, I was back at it, at least part of the time. It’s something I think I do pretty well, and after a bit of a hiatus I think I was able to use it differently, and even better. And the Celtic art I sell through my web sites has done well for me, too, so I think other people feel the same way about it.

I made a big change in my life in 2005. I dropped out of an industry where I’d been working for about 17 years and settled in a little harbor town in northeastern Ohio – the sort of pleasant but inexpensive place where an artists ought to be able to concentrate on making art. And I figured I’d try doing one or more large projects to better make use of my time.

One of those was an idea for a book of Celtic knotwork patterns, for other people to use: part clip art, part source book, it would present my original designs in a modular 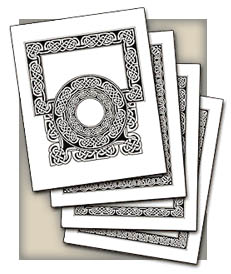 form that would be easy to use. Artists could build out their own borders in whatever size – and in many of the shapes – that they needed. That project lost out at first, and it was over a year later that I got back to it. But now it’s done, and as it turns out – after all these years – it’s the first book to have no one’s name on it but mine. I’m pretty proud of it.

You can see an example here of how it works. For each of the patterns, I’ve created modular sections for corners and straight sections and arcs, in different numbers of repeats around a circle. Half of the designs include branching sections that you can use to subdivide a frame into more than one area. And in every case, I’ve provided the sections in several sizes, though of course you can enlarge or reduce them to suit your needs.

Once the book was finished I also designed a series of paperback blank books with borders on every page and full color covers; they’re available in versions with either lined or unlined pages. And finally, I built a web site for them, which is a sort of sub-site for my “Celtic Art & Retro-Futuristic Design” shop.

I’m probably not done – I’ve got more than enough patterns roughed out for a second volume – but I’m not working on that just yet. It’ll take up to six months to finish another volume, and I need to let the first one find its legs first.

These are amazing days for artists. When I started out, printing – especially in color – was expensive. Typesetting was a cult ruled by a high priesthood who demanded sacrifices. These days we have wonderful freedoms in publishing and distributing our own work.

Every post I’ve made in my blog about the ways I’m offering my work online is a good example of what I mean. It’s easy to overlook in all the hoopla about the Internet, but as a result of the kinds of businesses that are possible online, and nowhere else, individual artists and writers can do damn near anything, as well or poorly as they’re able, and make their work available to anybody, anywhere. Without any use of traditional publishing models, distributors, or an investment in inventory.

This has never happened before. Ever. Anywhere. And we are just so very lucky that it has happened now.

This entry was posted on Saturday, July 28th, 2007
and was filed under Print On Demand, Works in Progress
There have been no responses »