– until I was talking about them one day with an artist on my (then) team. He’d come from Wisconsin, where he’d studied at Brooks Stevens’ school and later worked at his firm. Stevens himself wasn’t working any more, but he still turned up from time to time. So I did a bit of homework. Which at last led me to this book. 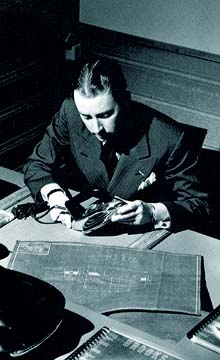 And sure enough, I already knew the man’s work even though I had known nothing about him. Stevens, like those other designers I mentioned, cut his designer’s teeth during the futuristic 1930’s – and like them, he was able to turn his hand to just about anything that was manufactured, from cars to trains to boats to kitchen appliances.

Like Dreyfuss, he was an eminently practical man when it came to product design. But Stevens also had an innate grasp of how people would be affected by the objects he designed. A perfect example of that is the fact that it was Stevens who put a window in a clothes dryer. What had been a featureless cabinet suddenly became animated, hypnotic; the dryers were styled very much like early televisions and in showrooms across the country people just stopped and… watched them. That one decision shows a pointed insight into the way we respond to objects. 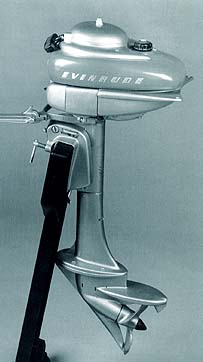 Through his long association with Evinrude, Stevens defined for us what an outboard motor should look like. He often took ungainly machines with jagged, mechanical profiles and streamlined them in casings – just the way designers were encasing steam engines in rocket-shaped, teardrop shells. Likewise he worked for many years for Studebaker, and – not to neglect the the ridiculous – he reinvented Oscar Mayer’s Wienermobile.

Yet one of his best remembered legacies of the 1950’s is his invention of the phrase “planned obsolescence”. He saw this as “instilling in the buyer the desire to own something a little newer, a little better, a little sooner than is necessary.” That’s far from the most sinister application of the phrase – which is to design products so that they will intentionally wear out within a certain timeframe, so that the buyer has no choice but to buy again. 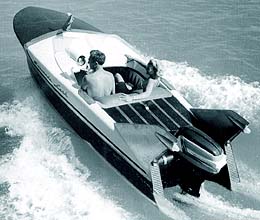 Even in its more aboveboard meaning there’s a kind of manipulation in the idea that doesn’t sit well with us. But in the past three decades industries have gone far beyond this, with the scheduled introduction of incompatible hardware, data formats, and operating systems, so that we are expected to buy the same content again and again to work on these new devices – especially where the older ones are no longer available. Steven’s phrase and intent seem somehow innocent, at this stage.

This handsome book gives us many examples of Stevens’ designs from every period from the 1930s to the late 1970s, and a good deal of insight into the ideas and client relationships that lay behind those designs.

One of the things that pleases me about these designers is the total world canvas they were able to paint. In the late 20th century industries became more and more specialized. But in the century’s early days it was more than ever possible to be a generalist – in any field, not just in design – and the overall style of the period makes their collective work somehow hang together, like the inevitable result of ongoing progress. It’s a fascinating period to study, and – maybe – to envy, just a little.

This entry was posted on Saturday, July 21st, 2007
and was filed under Reading / Watching / Consuming
There have been 2 Responses »