I must have started thinking about Saga Shirts in early 2005, though it might have been a bit earlier. There were two things that combined to make it happen. 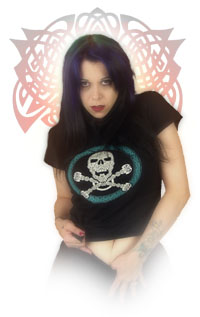 First, I’d been very happy with my print-on-demand web sites like “Celtic Art & Retro-Futuristic Design” and “The Retrovert“. But one problem with print-on-demand (at least then) was that there was no way to get good quality printing on black or dark colored shirts. I was asked for black shirts more often than anything else, I think. There just wasn’t any way to offer them that I felt good about selling, through a print on demand service; you still really needed to go with traditional silk screen printing.

The second thing was that in order to sell archival prints on my Celtic/Retro site, I’d started an account at Deviant Art. DA is at heart a social networking site, but in my case, I just wanted to sell their prints – which are excellent. So I set up my account, built my page there, and began to upload graphics to offer as prints. What I didn’t expect is that people there loved the art and made my page so popular in its first couple of months that I couldn’t keep up with all their comments. One of my first submissions was featured on the DA home page. I was just flooded with visitors. 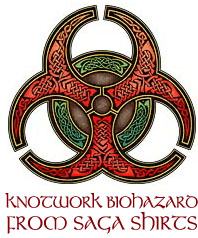 Most of this action centered on the Celtic art pieces I uploaded there. I was struck by the sort of people who liked them, and by what else those people liked, and I found – not for the first time – that something I did had become popular while I wasn’t looking. In this case it was people who loved dark art, punk rock (and several flavors of metal), and goth subculture.

So there I was, with a bunch of interested visitors who dressed in black. And no way to make black shirts.

So at Saga Shirts I tried another web-based fulfillment company called Printmojo. Printmojo is based on a silk screen printing business, but lets you set up an ecommerce site in which they process and ship your orders; like print-on-

So I worked up a line of dark-inclined Celtic art designs to be printed on dark shirts. The designs I focused on were mainly recognizable symbols, which I rendered as Celtic knotwork designs – things like a skull and crossbones and a biohazard symbol. This turned out to be a combination that worked very well.

And on the site itself I invented an imaginary backstory called “The Tragical Tale of Saga Shirts“, which explains how these helpless people found themselves enslaved by malignant t-shirts; based on designs that arrive without explanation from a law firm in Arkham, Massachusetts, the shirts have a will of their own, and become pretty dangerous when they’re stacked up in one place. It’s the sort of story that H. P. Lovecaft and J. Peterman might have cooked up together.

After a year and a half in operation, I realized that my customer base was still relatively small, though, and I was really being held back by all the traditional problems with shirt inventories. You have to stock shirts in as many sizes as you can manage, and you have to guess which sizes are going to sell. Having to maintain those inventories made it next to impossible for me to add more designs and garments. 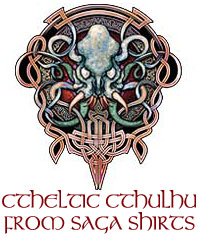 Late last year I ordered some sample shirts from a young print-on-demand company called Printfection – and I was absolutely thrilled with the quality of their work. I have also tried dark shirts from other print on demand companies, but I hadn’t found anyone who printed something I’d feel good about selling. Printfection’s shirts, in full color, were just amazingly good and I decided to use them in the future at Saga.

So this year I’ve made a complete revision to the Saga Shirts line, and its site. The designs are now all in full color. I’ve been able to design a whole lot of new shirts to expand the operation. I’m really pleased with the way the new incarnation of Saga has worked out. 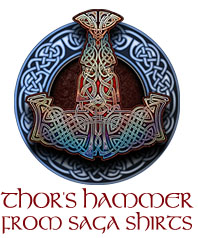 The original line of knotwork-filled symbols is a fairly narrow niche, so I’ve filled out the line with more dark art, but in addition I’ve done things like adding some Lovecraftian, Cthulhu Mythos themes that dovetail with the “Tragical Tale” (like Ctheltic Cthulhu and The Amazing Nyarlathotep); some Irish and Norse designs, along the “Saga” lines of the name itself (like An Claidheamh Soulis, Thor’s Hammer, and Only Word-Fame Never Dies); and some pagan and what are probably pagan spoofs (Today’s Forecast: Good Witch and Today’s Forecast: Bad Witch). And while black is still big at Saga I’ve been able to offer all sorts of other colors, and clothing styles I couldn’t, before.

On a budget-conscious note, this means that I’ve marked down the remaining inventory of silk screened shirts, which are still pretty neat in their own right.

One of those two-color designs (the “Knotwork Chaos Star”) is now also available through Northern Sun; they licensed the design from me and it’s sold through their catalog. Neat! It puts me right alongside Jen Delyth’s shirts, which is a nice sort of place to be.

This entry was posted on Tuesday, July 17th, 2007
and was filed under Print On Demand, Works in Progress
There have been no responses »