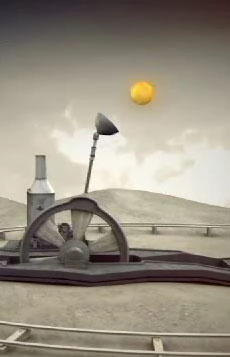 “Solar“, by Ian Wharton and Edward Shires, is a short animated film that shows us just how badly things may go wrong even in a universe that runs on sustainable, low technology mechanics. Well. That’s sort of what it shows us.

Fortunately even low tech cosmology has some built in safeguards.

The two artists behind the film recently graduated from the Cumbria Institute of the Arts, where their film took a best-of-show award. It’s got a lovely paynes’ grey and sepia palette for its steampunkish clockwork universe, and it’s easy to see why it won in competition.

This entry was posted on Thursday, July 12th, 2007
and was filed under Computer Graphics, Found on the Web
There have been no responses »