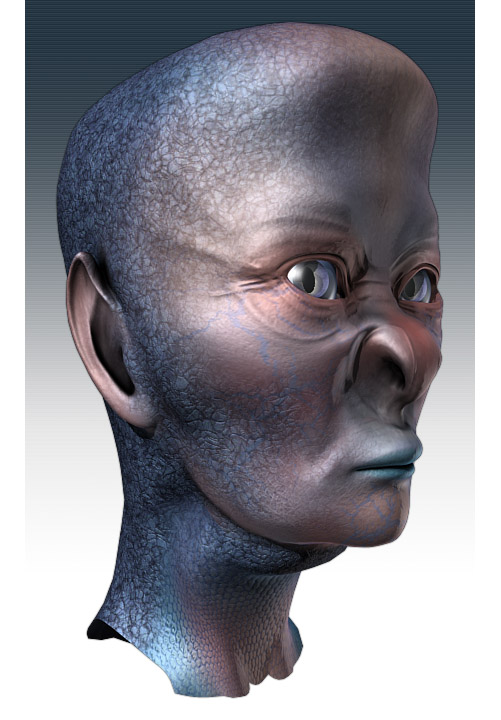 It’s with no small amount of pride that I can now reveal my second, and most successful, human hybrid experiment. I wish I knew exactly what it was; but, as you can see, it’s keeping an eye on us until I figure that out.

Over the past year or so I’ve learned some new tricks with my morph-targeted character heads, and the most interesting tricks are the ones I can play on characters that are already done. Some of this is due to Collapse to Morpher, a very useful 3DS Max script.

Morphs are terrific, but they rely on the source object and its morph targets sharing the exact same topology. That means they need to have the same number of vertices, and (importantly!) those vertices have to be numbered in the same order. If you’re not careful you can end up with two objects that used to share those properties but which now are subtly and fatally different. You just can’t morph them any more.

You can change an object after applying the morpher, and that works because the morphing action takes place before all those changes. But when you do that you end up with a new stack of modifiers on top of the morpher that can’t be collapsed. Every time you make a change to a scene with the modified object present, and in particular every time you change its morph states, all of the post-morph modifiers have to be recalculated in the scene. That slows things down. Slowing things down makes me cranky.

That’s how I’ve worked out ways to blend between two finished character heads, to optimize existing characters, to save time on operations like calculating vertex colors and UV mapping, and – now – to turn a human being into something entirely different.

I did something like this once before. But at that time I didn’t have a practical way to salvage the original morph targets for the character’s facial expressions. 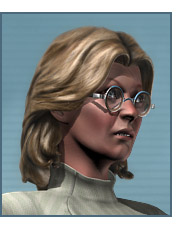 So here’s a little picture of my unwitting experimental subject, Dr. Lillian Krajnik. I started by cloning her (as one does) and then edited her head into the head you see at the top of this post. Once the clone was completely mutated I used Collapse to Morpher to turn it into a new, streamlined character – with all its original expression morphs updated as well. My weird fishy, lizardy human hybrid frowns and smiles and sneers and look surprised, on command, just like Lillian does. Almost automatically.

This stuff is just so cool when it actually works.

I have a little work to do on a few of the morph targets. The nostrils are so different now that any time they rise or expand they behave a little differently, and the eyes don’t close completely as they used to do. But editing that handful of morph targets is so much simpler than starting from scratch, every time.

So now I’m a human hybrid maker. In whatever odd moments I have over the next few months I think it’s going to get all Doctor Moreau in here.

This entry was posted on Tuesday, July 12th, 2016
and was filed under Computer Graphics, Works in Progress
There have been no responses »