Thrilling Tales – What’s Coming Up; also, What’s Not; and Tales of Woe 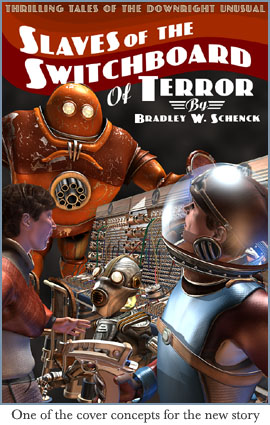 September 6th saw the final update in the Thrilling Tales of the Downright Unusual Feature "So! You’d Like to See Retropolis!" This sort-of a serial was a filler feature that picked up immediately after "The Lair of the Clockwork Book", and I’d hoped it would give me some breathing space during which I’d be able to get more work done on Part Two of "The Toaster With TWO BRAINS", and get the manuscript (and a few illustrations) done for the next Thrilling Tales serial.

It was a good plan: really, it was.

I did make some more headway on the illustrations for "The Riddle of the Wrong Brain" (that’s Part Two). And I did make a sizable start on the next serial, whose tentative title is – this week – "Slaves of the Switchboard of Doom". I got a bunch of character modeling done for the new Switchboard characters, too.

It’s been about four weeks since there’s been a story update at the Thrilling Tales site; so it’s pretty clear that I missed my self-imposed deadline.

Why is that? There are a couple of reasons.

Let me tell you about "Slaves of the Switchboard of Doom", or whatever its title is by the time you read this. Whereas "The Lair of the Clockwork Book" ran to about 37,000 words, the first draft of "Switchboard" is currently at just over 67,000, and it’s only about two thirds done. And… it’s a first draft. The second draft is going concentrate on vicious editing. The third draft, I hope, will go back over the wreckage and polish it up into a finished manuscript. Because these plans sometimes surprise us, there could easily be a fourth draft too.

So the first problem is that where "Lair" was a novella, this one’s a full length novel. And so in terms of building and finishing it, it turns out to be a completely different sort of beast: compare building a cottage, say, with building a skyscraper. Throughout – and even if there wasn’t that structural difference – I’ve wanted to spend more time with it, because in my need to feed the Thrilling Tales web site I’ve rushed the writing on all of its stories, and that’s curious, since the illustrations were always the genuine bottleneck. This time I’ve wanted to spend all the time it takes to make the story more worthy of the months of work that goes into its illustrations.

"All the time it takes", when it comes to something this much longer and larger, turns out to be quite a lot of time indeed. 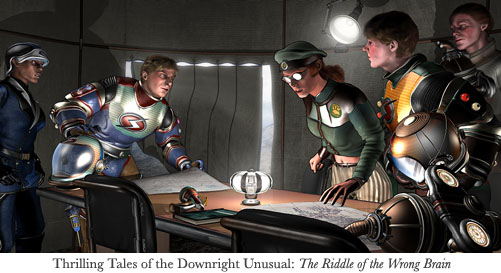 Of course the longer length of this book – taken together with its black and white illustrations, which are so much more economical to print – means that it might rouse the interest of a traditional publisher. In view of what follows, it might be worth my while to try to attract a mass market publisher.

Because, and this is the second problem, the Thrilling Tales site is an experiment that I’ve been running for three years now – well, over two and a half years since it launched, anyway. It’s an experiment along the lines of popular Web Site Theory: give away a whole lot of content for free, and people will buy a little bit of stuff from you in return.

The Thrilling Tales site is based on the format of a web comics site. It’s just got more words, and fewer pictures. Web comic sites depend on their readers to buy books and to click on ads, because it’s only through those book and merchandise sales, plus the ad revenue, that the sites make any kind of return on the artist’s investment of time. In my case, all the ads on the Thrilling Tales site lead to other web sites of mine where I hope to shake all the change out of my readers’ pockets. But the model is still the same: a small percentage of readers will buy something, or go to an external site and buy something there, in return for all that wonderful free content. Even in the most successful sites the percentage of people who "convert", or buy something, is very low. That math is pretty much the same for everybody.

So the successful sites are the ones that attract tens of thousands, or even hundreds of thousands, of visitors every day. With that kind of traffic even the low conversion rate can result in an income.

It’s very rare for the Thrilling Tales site to see even one thousand visitors in a day. So it ought to be pretty obvious that the math is not on the side of Thrilling Tales of the Downright Unusual. If it’s not as obvious to you as it seems to me, it’s like this: in order to be successful, this kind of web site has to attract a very, very large audience, and sadly that hasn’t been the case. 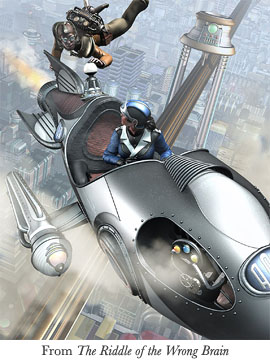 If we were to ask "Why?" then I guess the answer probably wouldn’t flatter me. So we’ll avoid that, and instead we’ll look at the results.

During the fourteen months that "The Lair of the Clockwork Book" ran on the site it was effectively my full time job. Just keeping the site fed while trying to make more progress on Part Two of "TWO BRAINS" ate up almost every hour that was available in my day.

So during the feature that ran this summer I cut the number of updates down to one each week so that it would run longer and I would have more time to work.

As we’ve seen… that wasn’t enough time to keep feeding the web site. Like I said at the start: it’s been about four weeks since the site’s last update.

So although the Thrilling Tales web site isn’t dead it still won’t be seeing any new content for awhile. The next thing to appear may be Part Two of "The Toaster With TWO BRAINS", because what I now have to call The Novel is a long term project. It’ll likely be several months before it’s ready to be read – and then, of course, there are the illustrations. When the manuscript is done I might – instead of posting it to the web site – start it on the always depressing rounds of editors and literary agents. In the meantime I also have to pursue freelance work – or any kind of work – more aggressively because my Secret Laboratory’s finances are in a sad, sad state.

You’re not here to hear my Tale of Woe; in fact, there are more than enough Tales of Woe to go around, these days. It’s enough to say "I have one."

I do hope to be able to update the Thrilling Tales site in a while, but even I don’t know when "a while" is. It’s certainly farther away than "soon".

This entry was posted on Thursday, September 27th, 2012
and was filed under Thrilling Tales of the Downright Unusual, Works in Progress
There have been 3 Responses »

Bradley, I’ve loved your style from the very beginning. Your retrofuture is fascinating. I have no idea why it hasn’t caught on more than you relate here. I realize that your creative style is not amendable to production of mass quantities of entertainment in a short period of time, but still, I really thought more people would follow you. I’m sure you have thought of many avenues for publicity and exposure, most being too expensive, some maybe not to your taste. I’ve never been to ComicCon, and I suppose a booth there would be VERY expensive, but that was one of my thoughts.

My own experience runs to PAX conventions, where you would be lucky to afford a table in the Annex and introduce a few hundred new converts to your wares. It’s first and foremost a gamers convention. And that ultimately may be the problem with connecting to sufficient people for your site. Most gamers are looking for the Next New Thing, usually FPS and MMO. They expect the game developer to employ hundreds of personnel from artists to programmers to churn out the annual iteration of mayhem that will simply blow them away and turn off all higher thought processes for X hours at a time.

I like my higher thought processes–and I can pronounce the word as well (eeze, not ess..well, whatever.) I like my games with strategy and wit. I like your work. Maybe we just are a little bit different from the masses.

Well, thanks for that – and for your Amazon reviews, too; I just noticed those this morning.

It was pretty obvious from the outset that the Thrilling Tales site wasn’t a fit for what you call “the masses”, and for any niche project like this to make a go of it it has to be hammered pretty firmly into (or at least in the direction of) its niche. So I have done quite a lot to promote it in ways that ranged from advertising to the Kickstarter drives and appeals to other web sites to feature it; the RSS updates and Twitter feed have given people easy ways to be reminded that there are new pages. Even the Kickstarter campaigns are a kind of promotion because it’s much easier to get outside coverage of an event – like a Kickstarter drive – than for something that’s just an ongoing project.

And the Thrilling Tales site has had its opportunities. It has gotten noticed on web sites that are much more popular than mine, and over time its readership has grown. It’s unfortunate that it just hasn’t grown enough to support itself.

Convention booths are out of the question for me. I simply don’t have a budget for them and in order to stock a booth I’d need a large amount of inventory, of course. I use print on demand so that I don’t need to invest in any inventory at all, and that’s the only way I’ve been able to make this work. My excuse for giving the Thrilling Tales site a try was that it was a way to promote my more commercial sites without spending anything more than my time, at a time when the economy had contracted and time was all I had to spend.

I guess at the moment I have a bit of trouble affording even the time. So the site will be going into an unpredictable kind of schedule. The chapters in the “TWO BRAINS” series appear all in one go, unlike the serials, so even though that’ll probably be the thing that updates it won’t be updating often enough for the site to hold on to returning visitors. But I do mean to finish it even if I’m not able to keep the serials running continuously.

I’m a big fan of the pulp art style, and I was thrilled when I Stumbled Upon your stuff. If you have not seen it, there is an Illustration Magazine which displays the art and tells the stories of the pulp artists of the 20s-60s.
For a while I struggled with TrueSpace, Cinema4D, Blender, Poser and other 3D programs but found each lacking something essential. I finally went back to painting in oils. But I applaud your sticking to it and making it work, and your marvelous sense of retro/future design, and on top of that the incredible effort necessary to make the e-commerce and web page stuff work. And I am now a big fan of your endeavors! Go man, go!
w