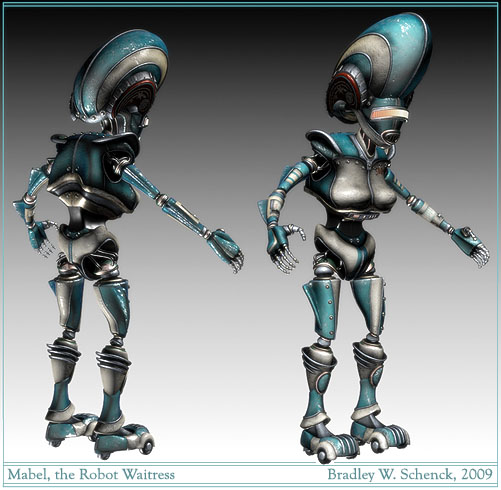 After a long, long hiatus I’ve just finished up a character I’ve been thinking about for years, though I only started working on her last December. She’s Mabel, a robot waitress.

Mabel’s supposed to remind you of that kind of waitress who’s been on her feet for the last forty-five years and still hasn’t had a foot massage. She’s a little cranky, maybe, and both well- and probably ill-used. She reminds me, in fact, of the hostess at a coffee shop I lived near in Los Angeles’ Silverlake neighborhood. There was fake leopardskin. There was big hair.

Anyhow, Mabel ought properly to be skating around the diner on the right: it’s a scene I started, in fact, when I was still living in that neighborhood and which I haven’t finished yet. Maybe I will, this year, now that I’ve got Mabel ready to inhabit it.

But in the meantime I have another five characters to skin – probably my least favorite task – and I’ll likely try to make some headway there. On the other hand I know that if I try to skin them all my head will explode, so there’s just a chance that I’ll escape to the diner someplace in there, too. The head thing makes such an awful mess.

This entry was posted on Wednesday, April 1st, 2009
and was filed under Works in Progress
There have been 2 Responses »

Yep, that’s exactly the way I felt about the hostess I was thinking about. 🙂