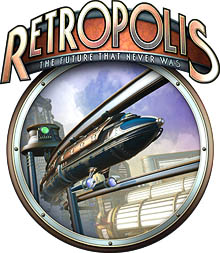 I was thinking maybe retro-robo-punk. I kind of like saying it, anyway.

There is also “raygun gothic.” but raygun punk sounds more like it.

Of all of them I like “Raygun Gothic” the best. It just sounds cool, even though I’m not sure it actually means anything :).