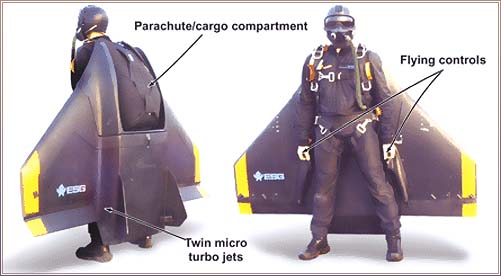 It’s hard to imagine a situation in which I would not want one of these. It would have been awesome back when I was commuting over 50 miles in Southern California – in those days, I wanted a personal airship – but since this jet pack is meant for parachutists and doesn’t allow you to take off from your driveway, I guess it wouldn’t have been the perfect solution.

Anyway it’s amazing; two small engines power what’s otherwise a glider that allows a parachutist to travel up to 200 kilometers through the air after leaping out of an airplane at 33,000 feet. (An unpowered version promises 50 kilometers of travel, and is quite a bit lighter, to boot).

Since the powered version weighs at least 80 pounds we’re looking at a new upside to having special forces paratroopers invade us, wherever we happen to be – they’ll probably have to leave their awesome jetpacks behind. Woot!

This entry was posted on Friday, January 25th, 2008
and was filed under Found on the Web
There have been 2 Responses »

i want one really bad. every night i have dreams about flying and ever since i was two, in ’88, it has been my life’s ambition to fly.

I what to know about how jet pack made with what type of materal& what are the soucer are requied do . respected sir/madam i know how make it but i don’t have the clear view about it so please send all the detal’s of it