This entry was posted on Monday, July 8th, 2013
and was filed under Thrilling Tales: Page Updates
There have been no responses »

This entry was posted on Thursday, July 4th, 2013
and was filed under Thrilling Tales: Page Updates
There have been no responses »

Big Changes at both Retropolis and the Celtic Art Works, including some lower prices 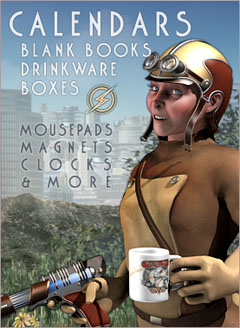 Last week I started some major rework at both Retropolis and The Celtic Art Works. Up to today the changes have been fairly subtle, dealing mainly with what merchandise is available from which vendors. But today I’ve started a facelift at Retropolis, starting out with the home page.

The facelift is going to continue, with new home page content and a new header across the entire site. In fact I may even rework the underlying HTML so that it’ll be more compatible with some things I may want to add in the future – things that build on the methods I used when I built the Pulp-O-Mizer.

But what you’re likely to notice first is the new splash image at the Retropolis home page. If you delve a little deeper you may realize that a lot of merchandise that used to come from the Retropolis Travel Bureau (at Zazzle) is now being sold through the Retropolis Rocket Works (at CafePress). Something similar is going on at my Celtic Art Works site.

That’s because recent changes to Zazzle’s policies mean that two things have happened: you’re being charged more for their merchandise, while simultaneously, I make less. It’s a lose-lose situation. Unless your name is "Zazzle", I mean. So I’m taking these steps to get us both a better deal.

The new Retropolis Rocket Works merchandise includes coffee mugs, magnets, buttons, mouse pads, and other things that formerly came from Zazzle… at far more attractive prices. I’ve even started by giving those items a pretty low markup, which may or may not continue, depending on what effect that has on sales. (An unfortunate truth about print on demand merchandise is that even with a minimal markup the goods will always be more expensive than mass produced merchandise. So in practice, since one can’t compete on price, it usually works out better to increase the markup.We’ll see how this experiment with lower prices works out. It may be for a limited time only, like they say.) 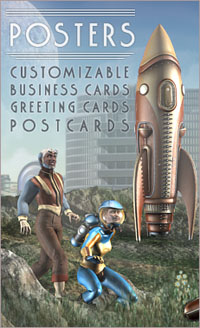 The holdout is posters. The Zazzle price increase, combined with how difficult they make it to change one’s markup, mean that poster prices are much higher right now than I like; and there isn’t an immediate solution.

CafePress made fine posters for me for about a decade. A year ago, though, they stopped trimming their posters to size. That means that if you buy an 18×24" poster from them what you get is an 18×24" print in the middle of a much larger sheet. You have to trim it down to size yourself. I don’t think that’s attractive to most buyers, who want to unroll the thing and pin it up, or tape it up, or frame it without having to finish the work themselves.

In addition CafePress has a bug at the moment that’s preventing them even from printing the pictures at the correct size. So my posters are still being sold through Zazzle in spite of their draconian price hike. I’m just not sure when or how that’s going to change. But be sure that I’m working on it: I’m looking into other vendors. Since one of my requirements is that I can easily include the merchandise into my own web sites, though, I have a pretty narrow pool to choose from.

I’m just glad that when I built these sites I made it relatively simple to swap the merchandise from one vendor to another. I did it once before, and now I’m doing it again. So yay for me, and yay for disaster preparedness!

In the meantime, enjoy everything… though maybe not the posters. Coffee mugs, on the other hand, are now priced at one-third off their Zazzle equivalents. Therefore, I suggest that The Answer is Coffee.

This entry was posted on Wednesday, July 3rd, 2013
and was filed under Print On Demand, Works in Progress
There have been 2 Responses »

This entry was posted on Monday, July 1st, 2013
and was filed under Thrilling Tales: Page Updates
There have been no responses »