Here we have three more of my not quite generic ladies of Retropolis; I could go on and on, and I’d like to because this is the stage of character work that I really like. I’m trying not to think about what I’ll go through when I skin them to their bones, since that’s the part that I emphatically do not like.

Still, since their faces and hands are taken care of already the worst is probably behind me.

I guess I should believe now that I have all the generic costume parts I need even though I would always like to have more. I do still need to turn out a similar number of male characters. That Clockwork Book clock just keeps ticking.

In the meantime I’m just about a home page away from launching my new site, The Celtic Art Works. That one will do for my Celtic art merchandise what the Retropolis site has done for my retro future: it gathers together all my Celtic design products from Celtic Art & Retro-Futuristic Design, Saga Shirts, and Ars Celtica so that I have a single shopping site where all that wonderful stuff is presented together.

I had meant to finish The Celtic Art Works at about this time last year – but since I didn’t start it until this summer I seem to have missed that goal. It really has been a pretty big job – but sometime this week, anyway, it ought to be done.

As a side effect of all this recent work, I may finally redo my Ladies World Domination Society T-shirt soon. It’s been asking for an update for months now, and armed with all these Retropolitan ladies, well, I probably won’t be able to hold out much longer.

This entry was posted on Monday, November 7th, 2011
and was filed under Thrilling Tales of the Downright Unusual, Works in Progress
There have been 5 Responses »

This entry was posted on Monday, November 7th, 2011
and was filed under Thrilling Tales: Page Updates
There have been no responses »

This entry was posted on Thursday, November 3rd, 2011
and was filed under Thrilling Tales: Page Updates
There have been no responses »

Thrilling Tales: it’s all about the ladies 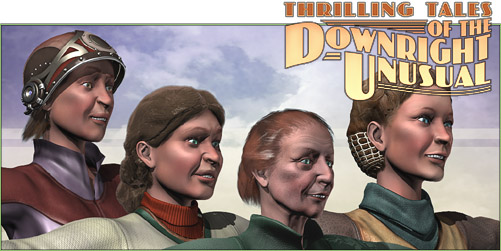 Well, it’s not really all about the ladies; but they’re what I had to drop into this picture.

During this round in which (theoretically) I’m working on Part Two of The Toaster With TWO BRAINS (while also catching up on a web project) and in which (actually) I’m building character assets like mad because I need so many folks in the background for upcoming scenes not only in TWO BRAINS but also in The Lair of the Clockwork Book, while still, truly, catching up on that web project, and – as I see with some dismay – constructing overlong sentences that just won’t die, I have been practically incommunicado because my nose is pressed so firmly into my monitor.

But I’ve done great, though undetectable, things: I’ve completely revamped my work flow for creating female character heads, with much greater controls over their expressions, and every one of these new heads uses the same object topology so that if I really wanted to, I could probably morph

them from one character to another. This involved some difficult work over five days – not counting making the actual heads you see here – but it’s the kind of thing that will continue to help me out in the future. The new system worked so well that I even rebuilt my Gwen Hopkins character’s head completely from scratch, since she has a lot of upcoming scenes in TWO BRAINS.

Male heads, on the other hand, are still ahead of me; I have to redo that preliminary work for them because their object topology will not be the same. But happily I still have the original (though incompatible) data for Nat Gonella’s head, and I’ll eventually be rebuilding that one with the new system, too.

But it’s not all about the heads. I’ve also finally done some 3D sculpting work that I actually like for clothing. I’ve turned out a bunch of different base garments and a number of texture variations on them, with more to come, so that you won’t think everyone in Retropolis shares the same clothes. This new approach involves high and low resolution versions of the garments, where I’ve built them completely in the higher resolution and then baked their textures and normals into low resolution versions of the same clothing. I’ll even have the higher resolution clothes there for use in some of my really large renderings.

So this period of a few weeks is just about all concerned with what, in a perfect world, would have been pre-production. I just don’t have the luxury of doing all that work at a more sensible time, when I’m not still under the evil eye of my schedule. Because for as long as I’m doing a serial I am always under the schedule’s evil eye.

The bothersome thing is that this work – though it will benefit TWO BRAINS – is coming out of the TWO BRAINS part of my schedule. The publication schedule for the Clockwork Book makes it a cruel master.

I just need two of me, I guess.

Anyway, it’s back to more of the same and some other stuff. I ought to get back to The Clockwork Book in a month – it would be better to do that even sooner. In the meantime, I’m an asset building machine.

This entry was posted on Wednesday, November 2nd, 2011
and was filed under Computer Graphics, Thrilling Tales of the Downright Unusual, Works in Progress
There have been no responses »