This entry was posted on Monday, October 10th, 2011
and was filed under Thrilling Tales: Page Updates
There have been no responses »

A couple of years ago, when I put together my Retropolis web site, I had no idea that there would be a problem there for users who were using touch sensitive mobile devices. Since I figured that out it has bothered me whenever I’ve had a moment to be bothered. 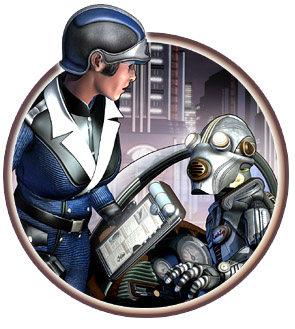 The problem is that my spiffy dropdown menus scroll down when you pass your mouse over them. This is a really neat thing, for desktops and laptops, while it’s a disaster on those devices that don’t understand the concept of a hovering pointer. Which is every touch device, I’m afraid.

The sorry truth is that I’m sure the main navigation at Retropolis just hasn’t worked for folks who came there with their iPad, their Android or Blackberry smartphone, or one of the countless numbers of other mobile devices.

I may have fixed that today; I can’t be certain (because I’ve got no actual mobile devices to test with*) but it seems sound.

I adopted the logic from a clever Python script. The deal is, you don’t want to have to selectively identify every mobile device in the universe. There are too many; there are more every day; and any bit of Javascript that tries to keep up to date will be as big as a phone book before you know it.

On the other hand, there are very few desktop operating systems. If you check for each of those, almost anything that’s left is a phone or tablet. There are some exceptions – the iPhone and iPad actually include the word "Mac OS" in their user agent strings (curse you, iDevices!) so you need to do a little additional screening to weed that out, as shown in the post above. But on the whole the logic works, so I made up my own little version in Javascript.

At the moment those menus should behave properly whether you’re on a desktop/laptop, or on a mobile device. But like I said I can’t do a lot of testing since at the moment I’m limited to Windows, plus a little user agent spoofing. 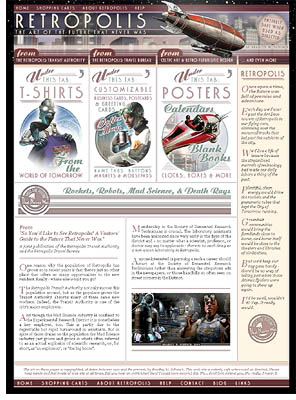 So if you’re using an iPad or an Android tablet, some other tablet, or a smartphone (or even an unusual operating system) you could test that for me by visiting Retropolis and trying to use the dropdown menu below the header on each page.

If you’re using a desktop computer the menus should drop down when you pass your mouse over them. If you’re using a mobile device, you should be able to bring the menu down by clicking on it. That’s all there is to it (I hope!)

You can enter your results in the comments here if you like; I’d like to know what device you used, what browser you used, and how the menus behaved.

What I hate in Safari – when I’m pretending to be an iPad – is that the menus pop down lower than on a desktop. But that’s a lot better than having them fail entirely, isn’t it?

*although I do have a fantastic 1947 Stromberg-Carlson telephone; so, you know, eat your heart out.

This entry was posted on Saturday, October 8th, 2011
and was filed under Web Development, Works in Progress
There have been 4 Responses » 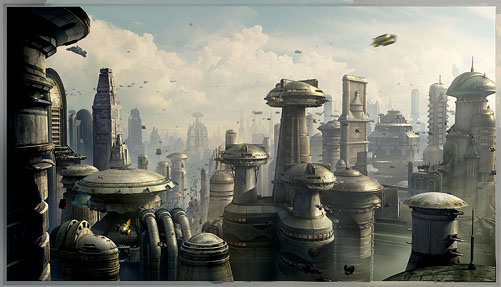 Over at The Intrepid Engine, an unattributed matte painting was a mystery that was happily solved with Tineye’s excellent image search tool. Tineye examines an image and returns a series of matches from the web: it’s a great way to re-identify some of the countless pictures on the web that have lost their makers through thoughtless reposting.

And this turned out to be a very happy find. It was the work of Yanick Dusseault, production artist, matte painter, and now an art director at Industrial Light and Magic. The image at the right is a part of that original mystery picture; it looks a lot like Gotham City in Christopher Nolan’s Batman films. Curiously, those films don’t show up in Dusseault’s extensive credits – even though The Lord of the Rings, Gattaca, Pirates of the Caribbean, Revenge of the Sith, and a gazillion other amazing films do. So go figure.

But anyway it’s inevitable that the image above is the one that grabbed me, since I’m always up for The World of Tomorrow.

In my entire life there have been only twenty seconds when I wanted to work in film, and I got over it immediately. But I always enjoy the work that these folks do, and here, especially. Dusseault’s gallery is a wonderful, ongoing body of work.

About all I found to like in the Star Wars prequels were the matte paintings and complete shots of the cities; that and, okay, the one scene where Obi Wan used his Jedi trickery to convince a lowlife to rethink his life (there was a whole and much more interesting movie in that single scene, I thought). It’s a pleasure to get a peek behind the curtain at one of the people who brought those places, and others, to life.

This entry was posted on Saturday, October 8th, 2011
and was filed under Found on the Web
There have been 2 Responses »

This entry was posted on Thursday, October 6th, 2011
and was filed under Thrilling Tales: Page Updates
There have been no responses »

Hugo Gernsback solves all my problems 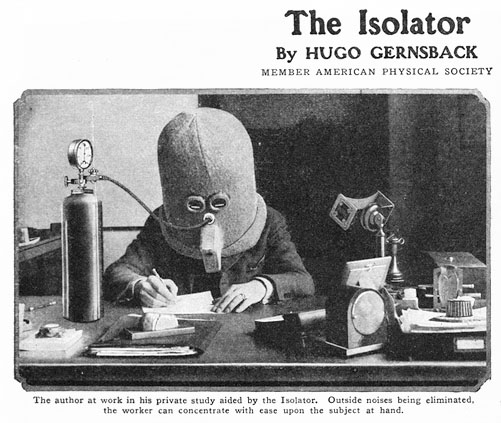 Okay, this is clearly what I need, because simple obsession and tunnel vision still don’t quite get me where I need to go.

A short article at A Great Disorder about Hugo Gernsback’s peculiar invention for screening out, um, everything, with the judicious application of absolutely mad science. Or anyway, mad ironmongery. Did you get that? Hello? SCREENING OUT EVERYTHING! HEY! I’M TALKING TO YOU!

This entry was posted on Wednesday, October 5th, 2011
and was filed under Found on the Web
There have been no responses »

Thrilling Tales: the Space Patrol and I are, basically, the Keystone Cops 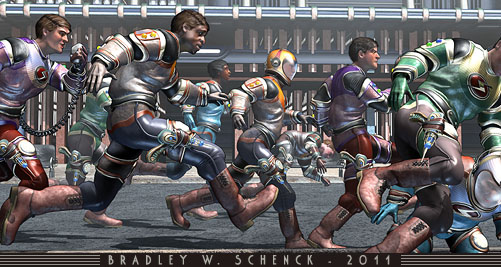 The Space Patrol and I are each hurrying, to the best of our ability… pretty much as you see here. I might or might not be falling over myself the way they’re doing: you be the judge. To assist you in your judgement you can click the image above and see it swoop into an embiggened state.

Still, one way or another I really do need to get about sixteen weeks ahead of what you see at the Thrilling Tales site, so I can pack the Clockwork Book away for a bit while I catch up on other things – notably, Part Two of The Toaster With TWO BRAINS. This is just about exactly what happened on my last Clockwork Book cycle. I guess it’s sort of a pattern.

I’ve been turning over some thoughts about the serial that’ll follow The Lair of the Clockwork Book. That’s still a few months away, but it makes sense to know where I’m going early. And often. So far… hmmmm.

Anyway, it’s back to the grind again, if by "grind" we mean the latest picture. With more Space Patrolpersons! And bonus hovercraft!

This entry was posted on Wednesday, October 5th, 2011
and was filed under Thrilling Tales of the Downright Unusual, Works in Progress
There have been no responses »

This entry was posted on Monday, October 3rd, 2011
and was filed under Thrilling Tales: Page Updates
There have been no responses »

2012 Calendars for the Thrilling Tales, Retropolis, and pretty much everything else

It is, anyhow, more calendars than any one of you is likely to need. But like someone I knew once said, "It takes all kinds of flowers to make a garden". So maybe just one or two of these would look good in yours. Next to the hydrangea, I think.

So, as you’ve guessed, it’s calendar season once again: that season when you get to spread twelve months of wall decoration and timeliness, not to mention dentist’s appointments, out in front of you so you can admire just how much time and novocaine lies ahead. And as I do every year I’ve tried to give you options, there, from the Thrilling Tales to Retropolis to Celtic Art and vintage graphics.

This entry was posted on Sunday, October 2nd, 2011
and was filed under Thrilling Tales of the Downright Unusual, Works in Progress
There have been no responses »