I’ve just committed the opposite of product placement. I can’t swear to it that I’m the first, so I won’t claim to have invented it.

While I was working on the Thrilling Tales script for The Lair of the Clockwork Book, I wrote in a coffee mug with "World’s Greatest Megalomaniac" printed on it. And having written it, I found that it wanted to exist. So now it does: twice over, in fact. 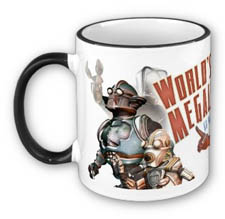 The Girly Edition Megalomaniac mug features a young lady with goggles and a ray gun that may not be approved for use by young ladies. I’m not sure: etiquette confuses me. I’m especially happy to have done this one because lately I’ve been getting requests for Mad Scientists of the female persuasion, especially girls. So I’m doing my bit here to encourage more of our young ladies to build giant robots and death rays. Somebody’s got to do it.

There’s also a Manly Edition Megalomaniac mug for the hidebound traditionalists among you. There’s plenty of world domination to go around, folks: no need to get competitive.

Anyway, these are just the thing for cowing your subordinates at work or down in the bomb shelter. Drink up! Shirts are likely to follow.

This entry was posted on Thursday, October 7th, 2010
and was filed under Thrilling Tales of the Downright Unusual, Works in Progress
There have been 3 Responses »

Thrilling Tales: an excerpt from The Lair of the Clockwork Book, with Captain Bonnie Scarlet 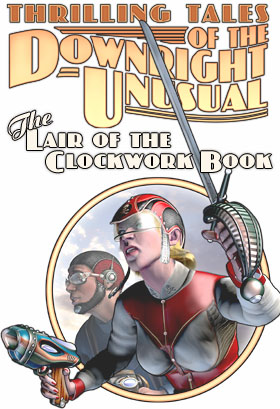 "Excuse me," Bonnie said to a passerby, "Which way to the Experimental Research District?" And then, like all sensible people, she went the other way.

The District represented one successful approach to innovation. If you took every wild-eyed scientist with a lab full of explosively inventive progress and then shoved them into the same small neighborhood, it was argued, they would tend only to hurt themselves, each other, and their assistants. There would always be civilian casualties, of course, but it was so much easier to keep those to a minimum if the threats were all crowded together. The apparent danger of one immense, coordinated incident was considered small because the occupants of the District tended toward self regulation of the kind that starts with "Fenwick’s project may be more remarkable than mine!" and ends with "Good old Fenwick. When shall we see his like again?"

The curious thing is that the District, in spite of its frequent disasters and the resulting unfortunate turnover in its population, had grown steadily in what Retropolitans often referred to as a quite literal explosion of scientific research, or, for short, as "the big boom".

The Air Safety Association had a special squad trained to deal with the District. That training, although Bonnie did not know it, was concentrated on a very large, top secret manual entitled "Things We Have Run From, and How To Run From Them". So the Myrmidon’s advice had been good, in its way: the authorities tried just as hard as anyone else to keep their business out of the District. But Bonnie had no intention of going where the Clockwork Book so clearly wanted her to go.

This had been planned for.

This entry was posted on Sunday, October 3rd, 2010
and was filed under Thrilling Tales of the Downright Unusual, Works in Progress
There have been no responses »

Hugo Gernsback’s Rocket Completes its Flight from Australia to Illinois 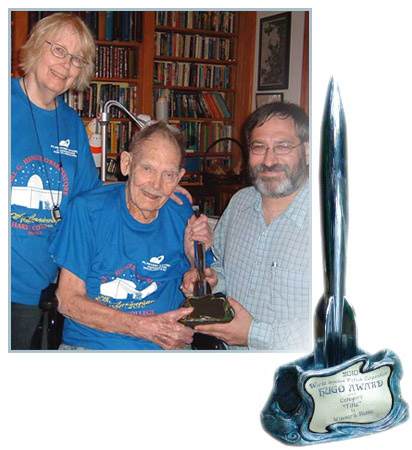 Over at The Way the Future Blogs, Frederik Pohl shows us that his 2010 Hugo award for "Best Fan Writer" has touched down after its continent-spanning flight.

Now if you’re familiar with his decades of professional work as a science fiction writer and editor you might be muttering "Fan Writer…?" to yourself and, believe me, I understand, but Pohl’s earned the award in at least one of two ways: first for his blog – whose name is a play on his retrospective book The Way the Future Was

– and second because he was one of the very first science fiction fans in the modern sense. Which, I think , means "in any sense".

If you read the book

(which I recommend) you’ll find that fans then were exactly like fans are today; that in itself is interesting. You’ll also find that in spite of his influence as a writer he may have contributed even more to the genre when he was wearing his editor’s hat, or his agent’s hat. Or both. Though I don’t suggest he stacked them in the way your mind’s eye is seeing them right now.

On a related note I’ve recently enjoyed a happily rambling interview with Pohl and Jack Vance at the Starship Sofa site. It’s probably more a conversation than an interview. And that’s probably why I liked it so well.

This entry was posted on Sunday, October 3rd, 2010
and was filed under Found on the Web
There have been no responses »