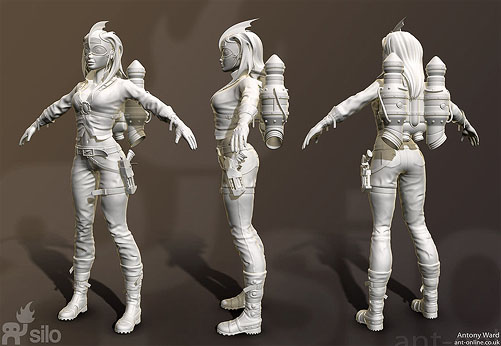 Just spotted this at Deviant Art: Antony Ward’s 3D model of a "Rocket Girl" character, via Silo, ZBrush and Maya. Really nice sculptural work there, and an interesting approach to her hair. I don’t think the character herself needs much explanation, since it goes something like this:

The proof is left as an exercise for the reader.

She’s part of a new book on Silo 3D that Ward is working on. There’s more information about that at his web site. His earlier books are Game Character Development

and Game Character Development with Maya.

This entry was posted on Friday, June 11th, 2010
and was filed under Computer Graphics, Found on the Web
There have been no responses »

I don’t own an XBox, but I guess if I did I’d totally fail to resist the complete wackiness of Snoopy Flying Ace. According to the Ars Technica review this game explores the deep and disturbing hallucinations of everyone’s favorite beagle as he dogfights with foes like a gigantic zeppelin (protected by force fields), and swoops in crazy Immelmans past the Eiffel tower, a beagle-shaped Sphinx, and… wait for it… a frozen dinosaur.

Power-ups include a doghouse-shaped plane and a tail gunner – Woodstock the bird. I can’t believe I think so, but the game sounds like loads of fun. It’s available through the XBox Live Arcade.

This entry was posted on Monday, June 7th, 2010
and was filed under Found on the Web
There have been no responses »

Work in Progress: the Clockwork Book 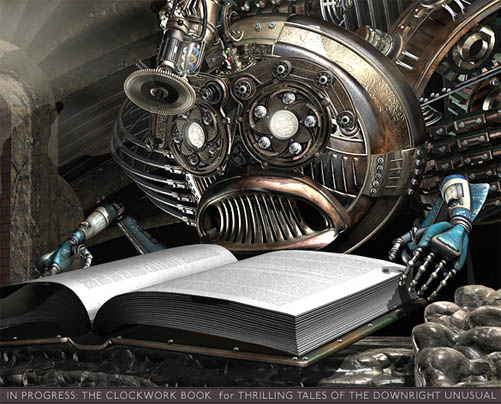 This is a preview rendering of the scene I’m now working on for a series of non-interactive stories we’ll be seeing at Thrilling Tales of the Downright Unusual. Click to embiggify it.

The Clockwork Book is unusually steampunk, for me. It’s a mechanical being that was built quite some time ago, as we measure time in Retropolis, and was designed to use simple, mechanical technology because part of its purpose is to last for a very long time. Here’s a little snippet about the Book:

There are always plenty of stories about the things we never talk about. That’s not a contradiction: it’s probably Quantum Mechanics.

So everyone knows about the Clockwork Book in spite of the fact that no one talks about it.

The people who visit the Book are perplexed, or obsessed, or desperate, and sometimes they’re all three. They Need To Know. And if you Need To Know, it’s maddening that somewhere below your feet lies the Clockwork Book in the midst of its Bookmaking machinery, calmly annotating the very thing you’re after. It preys on your mind. Until one day you slip down the quiet street where a hatch opens onto a shaft that leads far below the city to a tunnel, at the end of which lies the Book.

The Book, as I’ve said, accumulates stories. It does this by trading the stories it knows for new stories. This sounds harmless. In fact, it sounds beneficial. Until you think about it.

Because stories are not neutral. Stories always say something about the person who tells them. They often say more than the teller realizes, and it’s easy to become so wrapped up in the telling that we tell too much.

Everything that the Book learns becomes part of the Book. And the Book grows by trading the stories it knows – to anyone who asks.

Also… a very long time ago the English language decided that the word "spell" could mean two things: the way to form a word, or the way to distort the universe. This decision was not made casually. If you take the point of view that the English language recommends, you begin to see the Book as a very large, ever-growing nexus of words that may someday rip the fabric of reality into tiny quivering shreds.

Of course, the English language is excitable, and it tends toward exaggeration. But still…

Over the decades since the first part of the Clockwork Book collected its first story, people have gradually learned to avoid the Book despite the fact that, in general, we really want to know things. And there must be a reason.

There’s a way to find out for certain, of course: you just have to be willing to ask.

The Book exists to contain stories; it acquires stories by learning new stories; and it shares these stories with anyone who’s willing to trade. So in some ways you might point at the Book and say "Hey! A metaphor!" thinking of things like the Internet itself, or Facebook, or what have you. And although you’d have a point… I’m pretty sure you’d be wrong. The Book is what the Book is.

And for my purposes, at least, the Clockwork Book is the central character I was looking for to stand or, well, squat, anyway, at the center of the linear stories I plan to add to the Thrilling Tales web site. If you’re one of my Kickstarter supporters you’ll know a bit more about how I invented the Book a long time ago, and how I found it again as I rummaged around in my Idea Closet much more recently. And if you’re not one of my Kickstarter backers, well, I’m not telling. So there.

Because I’m just like that. No, that’s not it. I am just like that, of course, but since those good folks have chosen to help me out with the next stage of the Thrilling Tales, I want them to get something nobody else has got. And at the moment, that’s the tale of the Clockwork Book and Me.

So! In my not entirely subtle way, this is a reminder that if you enjoy the Thrilling Tales of the Downright Unusual, and you’d like to see more of them – including Part Two of The Toaster With TWO BRAINS and the tales of the Clockwork Book – well, have I got a pledge drive for you!

This entry was posted on Saturday, June 5th, 2010
and was filed under Thrilling Tales of the Downright Unusual, Works in Progress
There have been no responses »